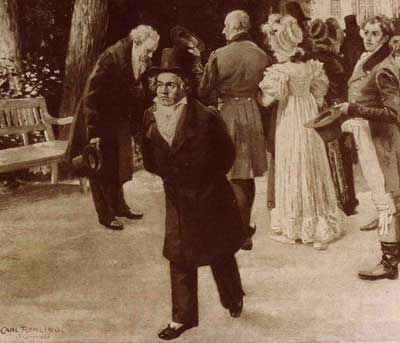 The Sonata in C sharp minor was a great favorite from the moment of its publication, and Beethoven jokingly even pretended to be annoyed about it, as he considered many of his other sonatas to be finer works musically; but still the “Moonlight Sonata” remains a warm favorite.

Probably the fact, technically, the lovely slow movement with which it commences is well within the reach of very moderate performers on the pianoforte may help to account for its extreme popularity over its fellows, since so many amateurs are able to derive pleasure from their own rendering of it.

Beethoven wrote thirty-two sonatas in all, of which certainly nearly half are still as beloved and admired as ever they were, and continue to form an absolutely essential part of the repertoire ofevery pianist. He brought the sonata form to its highest perfection, and, having found the models of his predecessors too stilted and formal for the wider expression of his thoughts, he made innovations of what in those days were considered the most daring kind, and improved upon the forms he found.

Like all original men of genius, he could not tolerate being fettered by conventions, and his mighty spirit soared untrammelled. The “Moonlight Sonata” is one of Beethoven’s most original compositions of the so-called second period of his works, and in it he shows his freedom of thought by commencing the Sonata with an adagio movement which is not in sonata form, and which was at the time an entire innovation. In fact, the whole work is a precursor of the modern sonata.

According to Beethoven’s own directions the three movements were to be played straight through to the end without a break. He puts “Attacca subito il sequente” after each movement, showing that the three movements were designed to represent a continuous thread of thought running throughout the whole work. This unusual and free treatment of the Sonata’s structure has imparted to it a modernity and freshness which ensure it an everlasting place in the literature of the pianoforte.