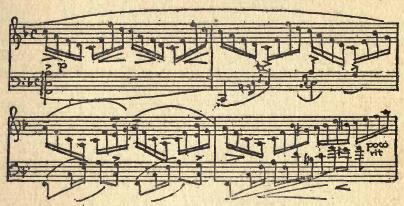 Online piano lesson about interpretation and some helpful tips on hot play piano. It is told of Beethoven, who composed the well known piano piece titled Fur Elise, that he played over one of his own compositions to a talented pupil in order to give him some idea of the interpretative side, and then asked the student to play the same piece again. This was done, and the master complimented him, remarking that although it differed greatly from the original, it was decidedly better. This reminds me of Tchaikovsky, who was asked, after conducting a composition of his own, why he did not do so in the same way as he had once done before. “My friend,” the master replied, “if you ever see me conduct this again, it will be different still. It is merely a matter of mood.” To show how different renderings of the same piece may be possible without the structure of the work being in any way altered, I give on page 80 two interpretations of the opening subject of Frederic Chopin’s Prelude in F Major, which both possess equal merit. (See Figs. 31 and 32.)

FIG. 32. Another rendering of the same subject.

Slow Tempo. Accompaniment in the right hand half-strength with thrown fingers left-hand melody brought out with accents as marked. In the right hand undulate movement expressed by a diminuendo and crescendo. The impression is one of movement birds singing, or water rippling.
Another detail which it is necessary for the student to bear in mind is that technical passages ought never to be played as if they were of purely digital dexterity, as this method makes of such passages only hard, uninteresting interludes of display, wearisome to the listener and of no value musically. All technical passages, even the most difficult ones, should be considered as embroideries of that main harmonies; in fact, they are the rhetoric of the composition.

Lesson online : How to play piano with right interpretation

Melody also should not be knocked out with unbalanced enthusiasm to the entire detriment of the accompaniment, nor should any two notes of a melody be given with exactly the same tone color, for this will create monotony of sound. Every single tone should be on a general scale of gradation, each having its own place in the scheme of chiaroscuro; because the mechanical tone of the piano itself, with which we are dealing, makes it imperative that every device to conjure up perspective and charm should be brought into service, and above all typewriting effects of precise striking must be strenuously avoided.