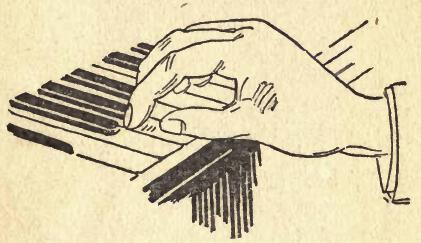 The first thing, then, that presents itself is the position of the body when seated at the instrument. With regard to this, the pupil should be seated with his chair exactly at the middle of the keyboard, and at a medium distance, that is to say, neither too near nor too far, but so that his fingers reach and fall easily and naturally upon the white notes when he is sitting upright on the front half of the chair.

On no account should the pupil be allowed to lean back, but always be seated on the forward portion of his seat. The seat should be sufficiently raised so that the pupil’s elbows at their natural angle will be almost on a level with the keyboard, if anything just a little below it as shown in Fig. I.

The elbows should be held closely to the body, and the wrist dropped slightly below the keys. Being thus seated, the next matter we come to is settling the position of the hand itself. This should be as follows :

Perfect position of the hand upon the piano keyboard : exercises

Having thus described what I consider the perfect position of the hand, I will now proceed to explain how to exercise the fingers in order to retain that position, and make it become a habit. This will be arrived at by practicing in the following manner:

This exercise, done every day for five minutes by each hand separately, will soon give the fingers and hands a perfectly easy and natural position upon the keyboard, and preserve the cup shape of the palm of the hand.